What amazing scenes here at the Mansion House as the first group of Magdalene ladies arrive for a gala dinner as part of their special homecoming #DublinHonoursMagdalenes pic.twitter.com/fFfm7q9dsX

Crowds welcoming Magdalene survivors and their families to Mansion House this evening pic.twitter.com/h2weBIx3Sy 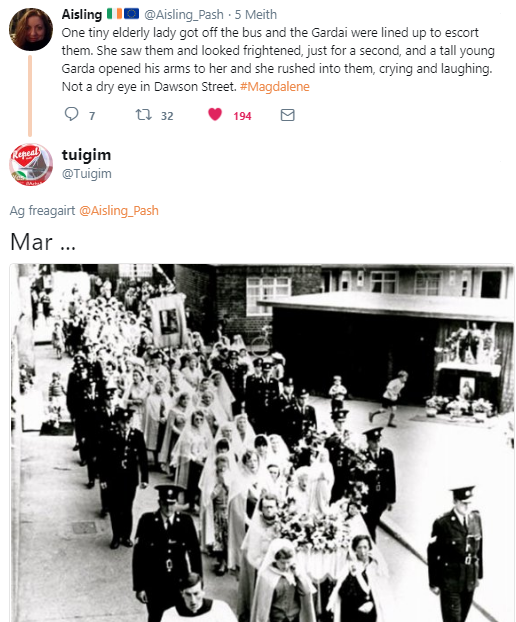 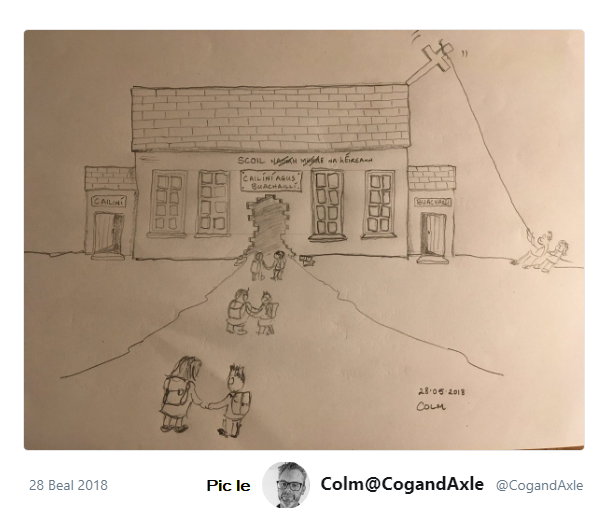 Samhlaigh is féidir linn a dhéanamh! 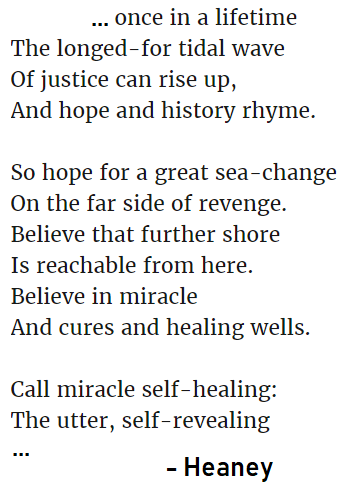 The fact that many of the women you’re being asked to vote for so they can have their rights are at this moment in exile and deprived of a vote shouldn’t put you off! Sure amn’t I one of them.

They rule our schools and call us monsters and murderers and threaten us with 14 years for daring to think we have rights. They have murdered us as small children in Tuam and with ignorance in our laws still.

But, but we have a weapon more powerful than any in the whole arsenal of their Vatican Empire in its unholy marriage with our government and law — and that weapon is our refusal, our refusal to bow to any order but our own, any institution but our own.

Our friends in Iona, Youth Defense, and American fundamentalist misogynistic churches would like to shut me up.

Oh yes, shut me up again, humiliate me, who knows? And I’d like you to send them a message. If they shut me up, who’ll vote Yes for me and for all women?

What I’m trying to do tonight, in the space I have, is to give you a bit of everything. And the next thing I’m going to do — maybe some of you heard about it, I don’t know — is called The American Wake. Now it’s nothing to do, directly, it’s nothing to do with America. But long ago, when people were going to America and emigrating, their parents knew they’d never see that particular person in this life again.

And the night before they left, the woman or the man who was leaving — It wasn’t so easy then to come home as it is now. They settled down more or less when they went to America, and they got married, and their parents died, meantime they could never see them. But anyway, the man or the woman who was going away visited all the old people in the village, invited them to have a dance that night in the house. And those that weren’t able to go, they gave them a bottle of something as a remembrance.

And they invited the people — Now I’m talking about a time when there was no musical instruments. And of course, long ago, musical instruments were barred, because some of the clergy reckoned that if you played music you were a druid or something — something pagan about you. So maybe it was a good thing, too. But anyway — there was somebody, always, who lilted a tune, and somebody danced to that tune.

Now, in the old country houses they had what was known as a half-door. And sometimes when somebody was dancing on a concrete kitchen floor they lifted off the half-door, and danced on top of the half-door. Now two of the tunes they used to play was a reel, My Love She’s in America, and a hornpipe, Off to California. This was during the night; and in the morning, of course, the song — the lament — was sung by always — nearly always — the woman. But this is somebody lilting a tune for somebody dancing. My Love She’s in America went something like this:

That’s My Love She’s in America. Now Off to California:

Now, the dancing was over, and in the morning, usually the mother, put her hands around whoever was going away, pointing out to that person that ‘Even though you’re going away, remember, you’ll get no money thrown on the pavements. Where you’re going you’ll see somebody rich; but remember, behind that person there may be twenty people who’s very poor. And when you’re walking the streets at night, remember, stop and listen, because as sure as anything the voice you’ll hear will be mine, calling you back; because you know I’ll always love you’.

And the song they used to sing was A Stór Mo Chroí.

A stór mo chroí, when you’re far away from the home you’ll soon be leaving
And it’s many a time by night and day your heart will be sorely grieving.
Though the stranger’s land might be rich and fair, and riches and treasure golden
You’ll pine, I know, for the long long ago and the love that’s never olden.

A stór mo chroí, in the stranger’s land there is plenty of wealth and wearing
Whilst gems adorn the rich and the grand there are faces with hunger tearing.
Though the road is dreary and hard to tread, the lights of their city may blind you
You’ll turn, a stór, to Erin’s shore and the ones you left behind you.

A stór mo chroí, when the evening sun over the mountain and meadow is falling
Won’t you turn away from the throng and listen and maybe you’ll hear me calling.
The voice that you’ll hear will be surely mine of somebody’s speedy returning
A rún, a rún, will you come back soon to the one who will always love you.