Glen Hansard played the Wiltern, LA on 6/20/12, the opening concert of his Rhythm and Repose tour.

The film Once that introduced most Americans to Glen Hansard started off with Van Morrsison’s And The Healing Has Begun and that was prophetic. This summer solstice in LA the Wiltern became a gathering place of souls for healing and Glen’s powerful music was the medicine of choice.

Those who understand the power of their music and the musicians who create magic with their sound gathered together at The Wiltern, a wonderful art deco building in Los Angeles, last night.  You get a sense of entering another time as you view the decorated walls and ceilings of the Wiltern. I entered it in the company of Vicky & Bob who have been to thirty one Glen concerts so far, sometimes on crutches and even once in a wheelchair! I can see why they gravitate towards the Glen factor. I watched them share joy with all around them. They greeted Joe who they met two days ago and who got his guitar signed by Glen in Amoeba as an old friend. This is the human factor at its best:  this is the way to live life.

It was a communal experience from the start.  If The Wiltern wasn’t sold out last night, it was damn close to it. The roar that welcomed Glen and Co. to the stage was not the same welcome cry of anticipation that welcomed him to The Wiltern back in 2007 where it all hushed down fast and reverence filled the room. Back then people wondered whether the music could be as good live or not. This time it was a roar of ‘Hell, yeah we know we’re going to have a good time.’  Glen read the crowd and felt the positive energy. There was no doubt on either side, just sheer joy in the playing and giving even when the music and lyrics were devastatingly true. He was born for this.

The band has grown. It is bigger now and truly it’s not necessary but who cares.  The man could give a concert with just his voice and his broken guitar and you’d have to remind yourself that there wasn’t a full orchestra playing. I’m not sure if he’s aware of his own power. But it’s about community and maybe that’s what keeps him grounded.  He picks up talented friends along the way. Glen cannot stay still. How could he? It’s in his creative nature. He will always explore and try new sounds. As much as I know everything was perfect as it was before, I also know he has to do this.

I wasn’t complaining last night as we were in the company of Leonard Cohen’s brilliant guitarist Javier Mas (¡Viva Asturias!). He took the simplicity of Paper Cup and Back Broke and made them sublime. I had seen him at Mc Cabe’s and was already a huge fan.  I wondered about the two extra string players behind Colm. The Frames’ violinist is a legendary part of the group and I wondered why he needed anyone else.  He too can make you think there is a whole orchestra playing when it’s just him and the fiddle (check out his contribution on the Swell Season /Daniel Johnston collaboration http://www.youtube.com/watch?v=dMYjCINcH9g  ). 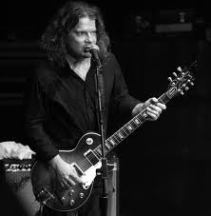 The most impressive evolution in the group was Rob Bochnik. His time spent watching over Markéta Irglová as she went on her tour clearly was very fruitful.  This was a new man on stage and I had to check that it really was him. I had no idea that his vocals were that good.  She must be a very special muse.  I would love to see this group again at the end of the tour to see how the sound evolves.

Lisa at the El Rey the night before. Glen attended and invited her to his gig the next day.

For the encore Lisa Hannigan sang Little Bird alone http://www.youtube.com/watch?v=DtOBYFzNZG0 and then joined John Smith and Joe Henry for The Night they Drove Old Dixie Down as a tribute to Levon Helm.

Glen’s Ireland didn’t have therapy. That was an American concept. Apart from hitting the bottle, the choices were to talk to a priest in confession or let the music do its healing.  The wise figured out the better option early on.  Yeats in his poem The Fiddler of Dooney wrote of a musician and his brother and cousin who were priests. The fiddler tells the tale: I passed my brother and cousin: they read in their books of prayer; I read in my book of songs I bought at the Sligo fair. When we come at the end of time to Peter sitting in state, he will smile on the three old spirits but call me first through the gate.

The concert started with The Storm: It’s Coming and that was utterly appropriate. Other Glen concerts have left me in awe. This one shakes you to the core. Be warned, oh you who dare to get aboard on this tour, that this will be a very heady and exhilarating emotional ride. Bird of Sorrow completely undid me. I was shaking and crying at that stage and am the better for the release. That’s a first. High Horses took me to a place of utter freedom. This is where you drink deeply of musical magic.

For those who are not yet familiar with Rhythm and Repose songs there was a mix with songs from Once and The Swell Season. Extra roars greeted those familiar songs. Most people only got their hands on the new album the day before but those unfamiliar with the new songs were won over by the end of each tune.

As we sang High Hope Glen noted how the singing along was like being in a church but without the priests. That was understating it. This was a night of stripping away of defenses and healing through the power of sound. To paraphrase Patrick Kavanagh, in word and tint he did not stint.

Posted by ancroiait on January 5, 2012
Posted in: Ceol, Gaeilge. Tagged: Amhrán, Cúinne an Ghiorria, Ceol, Colm Mac Con Iomaire, Gaeilge, I am the wave on the deepest sea, Port, Song of Anhargin.

from the Book of Leinster

Bain taitneamh as, a chairde.